Kids who lunch on school meals composed of Nordic ingredients including cabbage, fish, nuts and berries have better insulin sensitivity, less fat in the blood stream and lower blood pressure than children who eat a typical home-packed lunch. These are the findings of the OPUS School Meal Intervention, a project involving 900 Danish school children. The results are one aspect of the University of Copenhagen's OPUS Project, and are soon to be published in the British Journal of Nutrition. 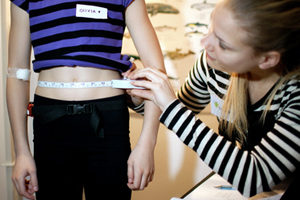 During the 2011-2012 school year, 834 school children between the ages of 8-11 took part in the OPUS School Meal Intervention project – a large, three-month scientific study to discover whether freshly prepared school meals could help children become healthier and contribute to improved learning. The meals, including two snacks and a warm lunch, were based around loads of fish, cabbage, root vegetables, nuts and berries.

The results demonstrated that children experienced improved health as a result of the Nordic School Meal Intervention across a range of parameters. They had lower blood pressure, less fat in their blood and slightly improved insulin sensitivity. In relation to the New Nordic Diet’s effects on cholesterol levels among the children, there was no net benefit, as both ”good” and ”bad” cholesterol counts were slightly reduced. The researchers also observed a marginal, 5 mm average increase in the children’s waistlines.

"We can see that the children became healthier by eating school meals based on Nordic ingredients vis-à-vis a range of parameters. Many of the significant risk predictors, including insulin sensitivity and blood pressure, improved in just three months. And while we observed a tiny increase in the children's waist size, their overall BMI was unaffected. Additionally, these small increases were no more prominent among children who were overweight prior to the study. Normally, an increase in waist size aggravates risk predictors. However, it appears that elements in these foodstuffs promoted general health so as to counteract any development of risk predictors," says Associate Professor of paediatric nutrition, Camilla T. Damsgaard of the University of Copenhagen. Damsgaard and PhD-student Stine-Mathilde Dalskov authored the article. 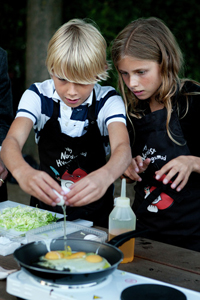 The study data does not allow researchers to know whether the marginally increased waistlines were due to the school meals themselves, what the children ate at home, or whether the children were a little less active over the study's duration. But one likely explanation is that the students were served ad libitum:

"It might just be that the children ate a bit more during the study. From eating an ordinary packed lunch during lunch break, the children went to preparing their lunches with cooks, as well as being provided with snacks. At the same time, they were given additional time to eat, set tables and the food was served ad libitum, so that the children, within reasonable limits, could eat as much as they liked," says PhD student Stine-Mathilde Dalskov.

A healthy childhood has implications for later on in life

While the researchers cannot be certain about what the implications of the immediate health benefits are for the children as adults in relation to illness, a number of studies suggest that childhood insulin, triglycerides and blood pressure levels do have a bearing on future health.

"We cannot say with certainty what a small improvement in a 10-year-old's blood pressure or triglyceride levels means for their risk of heart disease later on in life. But a number of studies have demonstrated that there is a correlation between childhood and adult levels. Therefore, we are quite sure that small beneficial effects established at a young age, and maintained thereafter, are of major significance for longer term health," states Kim Fleischer Michaelsen, a professor of paediatric nutrition at the University of Copenhagen.

The researchers are now investigating whether it was the fibrous vegetables, fish, lower fat content or perhaps something else in the school meals that lead to the mainly beneficial effects on the children’s health. The researchers will also deepen their investigation into how these foods are combined:

"In upcoming research projects, we will investigate if, by altering the balance between proteins and carbohydrates in the diet, we can prevent weight gain among children, and thereby prevent overweight and obesity among Danish school children," says Centre Director and Professor, Dr. Arne Astrup.

Find out more at: http://foodoflife.ku.dk/opus/english/